Pierre-Louis Mascia uses collage to create intricate patterns of surprising visual clarity which he prints allover wearable items. He seamlessly merges the achingly sharp and the softly organic in the same cadre, relying on sudden about-turns, unexpected parallels and optical duplicity. “I feel more like a dessinateur than a fashion designer. The mix of different patterns, a constant attention to the color palette and the use of certain materials define the identity of my collections” he says.

Mascia, a trained illustrator, hails from Toulouse, France. He launched the Pierre-Louis Mascia line in 2007, under the tutelage of the Uliassi brothers, owners of the Achille Pinto printing factory in Como, Italy, whose glorious history dates back to eight decades of excellence in the field. The collection started with scarves and subsequently grew into a lifestyle proposal which today includes knitwear, outerwear, backpacks, throws, cushions. The electricity of subdued contrast is the defining trait: design is clean, almost bare, while the eye is constantly stimulated by the psychedelic yet rigorous whirlwind of motifs and colors running on surfaces. The peaceful fight of Bauhaus strictness and Rococo abandon translates into a mix of control and anarchy.

Mascia’s compositions are flat patterns that usually begin in 3D, getting closer to their final, flat layout through a process emotional, intuitive edit. When worn, they regain volume. Everything provides inspiration: a mix of vintage fabrics or thorn book pages, laid out in op art mode; antique wallpapers and old pieces of clothing; a curtain, a shadow or maybe even the way tomes are put on a bookshelf. “It all comes from the guts” explains Mascia, who prefers the work to speak by itself.

Mascia works in total artistic freedom while retaining a pragmatic view on the form/function debate. He creates useful objects with a surprising outer shell. “Each season I begin by mixing references, patterns and designs, then reduce it down progressively into a collection” he says. Cut-up is integral to his life and practice, from the prints he conceives to a lifestyle of constant commuting between France and Italy. 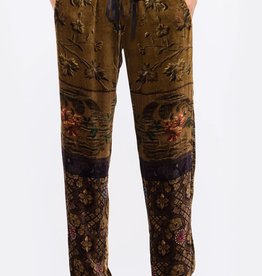